Michel Roth is one of the most accomplished chefs in the world, having been awarded some of the most prestigious titles in French gastronomy:

in 1985 he won the Pierre Taittinger International Culinary Prize, before receiving the Bocuse d’Or and Meilleur Ouvrier de France titles in 1991.

Michel Roth represents the epitome of haute cuisine and excellence.

Originally from the Grand Est, a region of France which he holds particularly dear, Roth shares strong values with DE BUYER.

A deeply humble and incredibly kind individual, in this interview he shares with us the secrets of an exceptional career. 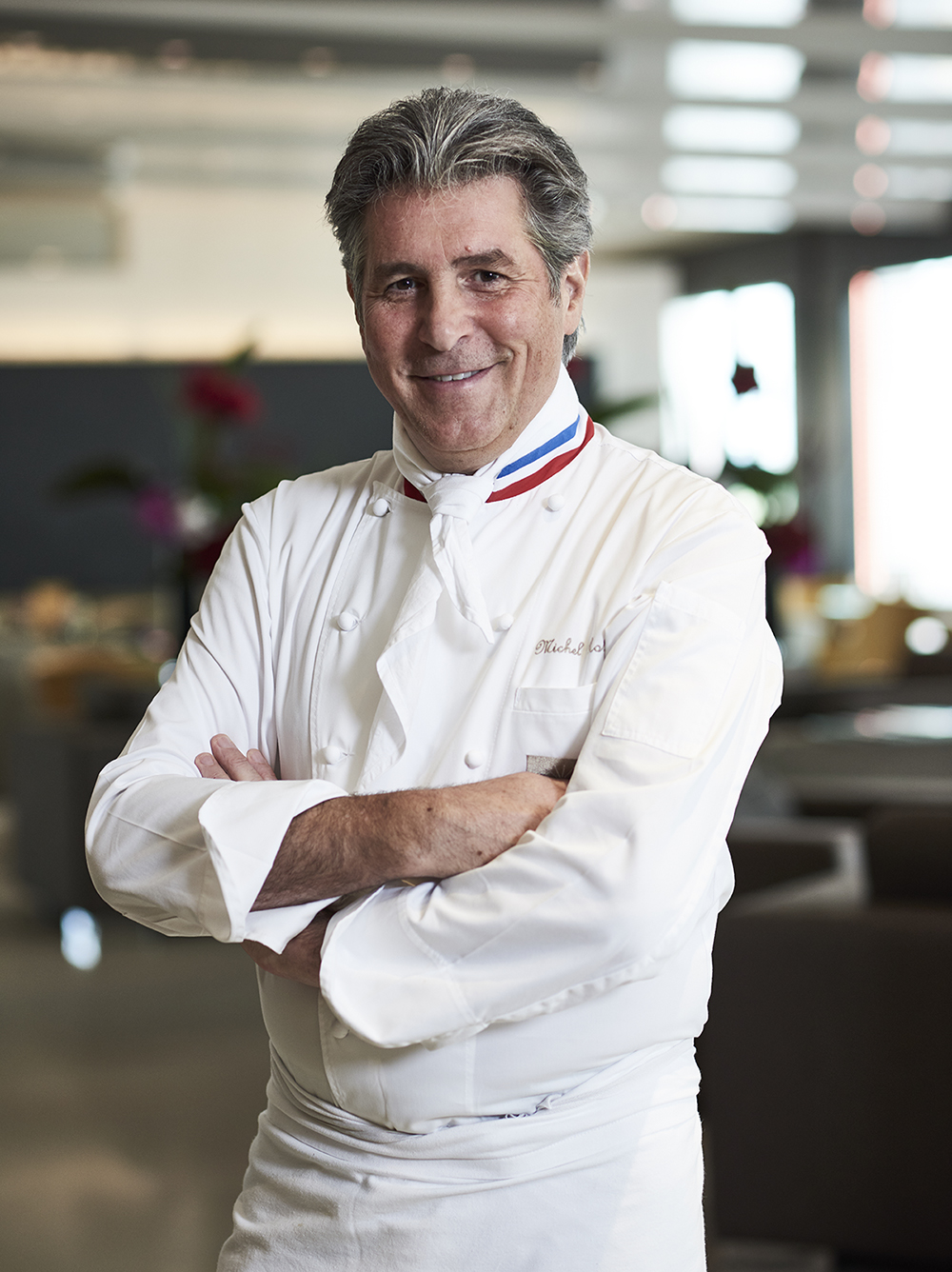 How did you discover your passion for cooking?

From a very early age I was often in the kitchen with my mother and grandmother, they were the ones who taught me my first recipes. It was my father who saw the beginnings of my passion and said to me one day, “You will be a chef.” I began an apprenticeship at 15, working for a friend of my father’s. It was very hard in the beginning because
I didn’t really have any concept of how things worked, I didn’t know the hours of the job… I immediately had to get used to such constraints. I lost my father a few months later and my master somewhat took me under his wing, which is not to say he went any easier on me! Over time I started to enjoy the job more and I began to take an interest in working with the products: making vinaigrettes, preparing trout with almonds, and so on.

What was your most important encounter?

My apprenticeship master to begin with. He was the one who told me, “You need to get moving and go to the capital.”
It was with his help and some audacity that I was lucky enough to join Guy Legay’s team at the Ritz, which was the other important encounter at the start of my career. He encouraged me to enter competitions. He had confidence in me. That wasn’t always easy day after day, because you had to be good.

What advice would you give to young people looking to work in cuisine today?

The beginning of the career is very important and stays with you forever. I never stop thinking about it. In my view it was those first years that were the most important. They mould you. Even if they are difficult at times, they form the foundations. You learn what you need to know little by little. Passion, meanwhile, is something which surfaces and then grows as the years go by. If I had to give one piece of advice, it would be to have patience. Don’t cut corners. Cooking is a job which requires a certain level of experience, and you need things to mature before the finest notes can emerge. Always be ready to listen, take a step back, enjoy the moment and savour it before turning a corner.

You won a number of different competitions. What did you take away from that?

I won several competitions, more or less within the same year. I don’t like focus on those kinds of awards but I do believe that they help you to find new ways to look at things, new techniques, new products. Those competitions lent me recognition in the field. That opened the door to the big leagues. I received a lot of invitations, particularly to go abroad, but my attachment to my family and Lorraine meant that I refused. I had never experienced any of that before the competitions. It’s nice to win a competition, but you shouldn’t forget your responsibilities. This is a long-term commitment where you shouldn’t get carried away; it embodies the values of respect, work, and excellence. You have a duty to stay on top of your game.

It’s said that people from Lorraine are tough but demanding in their work. What do you think?

I see it more as reserved, discreet, cold even, that much is true. There are a lot of talented young people in Lorraine but they don’t try hard enough to stand out. These are sincere, hard-working people. I don’t know if it’s only in Lorraine that you find people like that. When I was an apprentice, I took every opportunity to go home and see my family in Lorraine. That’s why I never wanted to go work abroad, because I’m so attached to my region. I also return regularly to the places I trained.

Every recipe has a secret, what’s yours?

My cooking starts first and foremost with the basics, and traditional, seasonal and regional food. Next I create flavours and mixtures, following my instinct in the moment while trying to create something
surprising. I like to play with a carefully balanced touch of bitterness, which can introduce an element of surprise. I also like to play with acidity, as it can reveal the flavours. It’s often the proper balancing of these tastes that makes all the difference, and that’s where the complexity lies. Precision in cooking is also important.

Why did you agree to become our ambassador?

It seemed like a natural fit and I feel very connected to DE BUYER. This company embodies the history of our region, a history of family tradition which is being modernised but which maintains a solid foundation. The people working there act as if they’re making pans for themselves. I can see the values I appreciate at DE BUYER: precision, simplicity, respect, work, craftsmanship, and an attachment to the region. There’s a level of excellence while maintaining humility. That’s rare, and that’s what makes the difference. Those values are also what I look for in my teams; everybody is working with a sense of sincerity.

How did you get to know DE BUYER?

I’ve always known about the brand because it’s a brand from my region. I’ve always held a very positive view of the brand’s image, which represents reliable, quality products. This image has developed a great deal over time and it has increasingly turned towards modernity and innovation. I’ve had the opportunity to use DE BUYER products throughout my career and to see these developments take place through the partnerships you’ve established with chefs’ associations.

We believe that good cuisine needs good chefs and good ingredients, but also good utensils. What do you think?

That’s certainly true; if you only knew how many times we’ve said the same in the kitchen. Half of the work done by a good chef comes down to having good products, products prepared by passionate artisans which give us the chance to make the very best of a recipe. But we can’t do that without the proper tools. Our work in the kitchen requires precision and our equipment is our closest ally, allowing us to express ourselves in a dish with ease, safe in the knowledge that the result will be just perfect!